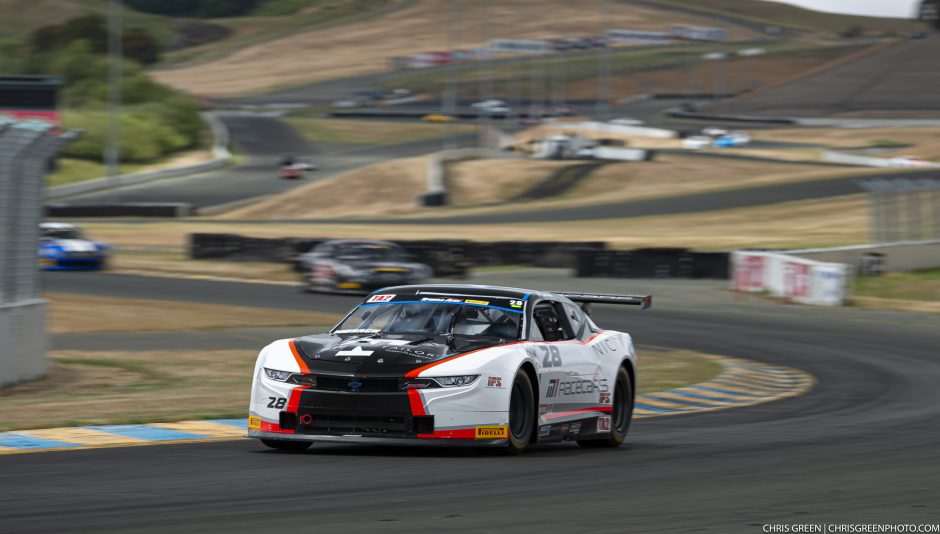 Those are the opening lines of Dr. Seuss’ timeless book, Oh, the Places You’ll Go!, and they’re incredibly appropriate for TeamSLR’s driver lineup during the Trans Am Memorial Day Classic May 28-31 at Lime Rock Park in Lakeville, Connecticut.

The book is synonymous with graduations, and 22-year-old Connor Mosack, driver of TeamSLR’s No. 28 Chevrolet Camaro in the TA2 division of the Trans Am Series presented by Pirelli, is a freshly minted graduate of High Point (N.C.) University. He walked across the stage and accepted his diploma on May 8, less than a week after returning from Trans Am’s West Coast swing where the Charlotte, North Carolina-native scored a strong second-place finish in the ProAm Challenge race at Sonoma (Calif.) Raceway.

With his degree in business entrepreneurship in one hand and his helmet in the other, Mosack teams up with fellow High Point alum Dillon Machavern for this weekend’s Trans Am race at Lime Rock. Machavern graduated from High Point in 2017 with a degree in business administration. Both drivers successfully juggled school – from junior high, through high school and on into college – with burgeoning racing careers. Now they’re paired at TeamSLR, with Mosack honing his road-racing skills to be a more versatile NASCAR driver and Machavern looking to add some more accolades to his already impressive sportscar resume.

Lime Rock will mark Mosack’s 10th career Trans Am start and his first at the iconic 1.478-mile road course in southern New England. Machavern will make his 47th career Trans Am start and his third at Lime Rock, but the 26-year-old racer from Charlotte, Vermont, has plenty of experience at Lime Rock, from early in his career as a student at the Skip Barber Racing School to competing in SCCA, IMSA and Trans Am races.

Machavern is a four-time winner in Trans Am, and in his two Trans Am starts at Lime Rock, he finished second both times – to Tony Ave in 2015 and to Thomas Merrill in 2019. Machavern has joined TeamSLR and its No. 92 Chevrolet Camaro with the intent of taking that final step onto Lime Rock’s podium.

Mosack is also eyeing the win. He is running the full Trans Am schedule in 2021 and despite nearly every track being new to him, Mosack has quickly learned the nuances of each venue, leveraging the speed in his M1 Racecars-built Camaro to run up front and contend for wins.

Mosack’s career juggling act continues as well, but instead of balancing school with racing, he’s balancing his Trans Am duties with his NASCAR aspirations. While Trans Am has been off since competing May 1 at WeatherTech Raceway Laguna Seca, Mosack was on. Six days after graduating from High Point, Mosack was at Dover (Del.) International Speedway competing in the ARCA Menards East Series race. He finished a solid seventh, completing all 125 laps at the aptly named Monster Mile.

After turning left for 125 miles at Dover, Mosack will see only one left turn at Lime Rock. It’s a unique course where speed is either gained or lost depending on one’s commitment to West Bend (turn six) and the downhill section in turn seven. The camber at the out-point of West Bend goes negative, so last-minute steering inputs are often futile. The downhill section arrives quickly, and it’s an area where drivers can’t afford to lift. It exits onto the frontstraight, and any loss of speed will bedevil a driver for another 2,000-plus feet before braking into Big Bend.

It’s a track that demands proactive thought, but for TeamSLR’s drivers who have had to proactively balance school with racing, it segues perfectly to the second part of Dr. Seuss’ opening line in Oh, the Places You’ll Go!: “You’re on your own. And you know what you know. And YOU are the guy who’ll decide where to go.”

“In the last few weeks, I graduated from High Point University and competed in my first ARCA Menards Series East race at Dover International Speedway.

“My degree is in business entrepreneurship. Managing school and racing definitely had its challenges. Racing involves a lot of travel, obviously, so catching up on missed classes and staying on top of all the work meant I had to be really organized. Thankfully, my professors at High Point were great and were always willing to work with me around my schedule.

“The marketing classes and some of the entrepreneurial classes I took gave me a better insight into what a business thinks about when starting a venture into advertising or, more specifically, using motorsports as a marketing tool.

“We’ve got two High Point graduates on the team this week with me and Dillon Machavern. It’s always nice to represent where you came from and we get the chance to do just that this weekend at Lime Rock.

“I have zero real-life experience with Lime Rock. I’ve run many laps on the simulator around there and have watched some in-car videos. This seems to be the best way for me to prepare for a new track without actually getting to go there.

“So far, I’ve learned what the line around Lime Rock looks like, and I have ideas on where I need to be when I’m on the track. Also, I know to lift if the car gets airborne in turn five so I don’t break second gear.

“Lime Rock will be my 10th Trans Am race, and I think by learning the car more and more, it helps on learning the tracks more quickly. Having a better understanding of the car helps me focus on the track and knowing what I can do with the car to make it work better in new corners.

“I’ve been ready to get back after it since the day we raced at Laguna Seca. I made a mistake that cost us a shot at a really good finish, but I know we’ll have the speed to be a serious contender the rest of the season. I think we can fight for podiums and wins every week, and that is what we intend to do.”

“I’ve been racing professionally since 2012. I did my first full season in IMSA, as well as the Lamborghini Super Trofeo Series, in 2014 and made my debut in the TA2 class a year later. I’ve had success in both series including a couple IMSA championships and a runner-up in TA2. I’m back in a TA2 car because I’ve always enjoyed the single-driver, sprint-race format and there is nothing like the raw driving experience of a TA2 machine.

“It’s pretty cool that we’ve got two High Point guys on the team this weekend at Lime Rock. Juggling racing and school is not easy. Luckily, I gained a lot of time-management experience in high school, which made the transition to college pretty smooth. My professors were very flexible and understanding, and some of them even became fans.

“I was a business administration major, so I was able to pull pieces of each into the business side of racing. I think racing has had a greater impact on my personal and business development because I was thrown in the deep end as a young kid, so I had to mature quickly and learn how to interact professionally with adults.

“I was actually racing at VIR (Virginia International Raceway in Alton) and my mom went on a scouting trip in the surrounding area and toured High Point. She told me I had to check it out. I knew I wanted to go to school in the south and High Point blew me away.

“It’s great to get back to Lime Rock. Off the top of my head, I can’t say how many events I’ve done at Lime Rock, but I have competed at Lime Rock in almost every series I’ve ever done including the Skip Barber Racing School, SCCA, Trans Am and IMSA.

“Although the lap is short, the designers were able to pack a lot of variety into the bullring that is Lime Rock. There’s a lot of elevation change and a mix of technical corners and high speed, like the final corner coming down the hill to the flag. It’s a hard place to pass and there is never an opportunity to catch your breath as a driver. You always have to be switched on. I’ve always loved launching over the hill and having to catch the car on the landing.

“I’m coming into the weekend with the expectation that we’re going to be competing for the podium. I tested with TeamSLR earlier in the season and the team showed a lot of pace and I’ve always felt at home at Lime Rock in a TA2 car, so I’m looking forward to battling it out for the top step.

“My dad (David Machavern) made one Trans Am appearance at Lime Rock (1989). Unfortunately, I was never able to see him race there, but I’ve learned so much from him over the years about race craft and being disciplined throughout a race, which is especially important at a track like Lime Rock where passing opportunities are limited.

“I’m from Vermont, and even though Lime Rock is the closest track in proximity to my hometown, I’ve spent the most time at VIR and Road Atlanta. When I was club racing, I was a member of the Southeast region and did most of my racing down south because it was more competitive and the season was longer. Sebring is actually the first track I ever drove on with the Skip Barber Racing School. It was also the first track I competed on.”

“While it is Connor’s first trip to Lime Rock, just like most of the other tracks we’ve been to so far this year, he has been very impressive and a quick learner of the track. We have two talented drivers getting into our M1 Racecars-built Chevrolet Camaros this weekend and I believe we’ll be able to compete in the top-five as we all lean on each other throughout the weekend to make the cars better and faster.

“We’re coming off a month-long break after our West Coast swing to Sonoma and Laguna Seca, but that doesn’t mean we took a break. While we did have a month off from racing, our team is always evolving and working to get better. So during the time away from the track, we were heading to tests, making improvements to our current cars, and just spending all that time making our cars faster. Since we got back from the West Coast, I’ve been really pleased with our schedule and performance as we prepare for the rest of the race season.

“I believe our team will continue to show our speed and be able to compete for a win on Monday at Lime Rock. We’ve seen firsthand this season how quickly Connor can learn a racetrack and be competitive. I believe that he will continue that this weekend at Lime Rock. For Dillon, he has a lot of road-racing experience. He has multiple wins in Trans Am and IMSA. He has raced at Lime Rock before and knows the track really well, so I’m expecting big things this weekend.

“We’ve got two racers from the same university in our cars this weekend. I don’t think we’ve ever had that before. I actually really like it, because juggling school and racing takes a lot of dedication on both fronts, and it shows the kind of drive these guys have to be successful.

“My parents always stressed the importance of getting an education. I bought into getting an education really early on. It was something I never questioned because I knew a racing career would not last forever. I applaud Connor and Dillon for being able to focus on school while racing fulltime. It’s a tough balance, and I know the things they had to sacrifice at times to make both work.”

Note: Lagasse is a 2004 graduate of Flagler College in St. Augustine, Florida.